Have you caught an unpleasant whiff of a damp odor in your home recently? Or has your house smelt different from the usual fragrance it emits? Regardless, the best way to make things smell great again is to address the cause behind the musty odor. So, you may wonder, why house smell musty?

From mold and mildew growth to forgotten spills and messes, these are a few reasons your home might’ve started smelling musty recently.

Read on to see the possible causes of the musty smell in your house and how to fix them. 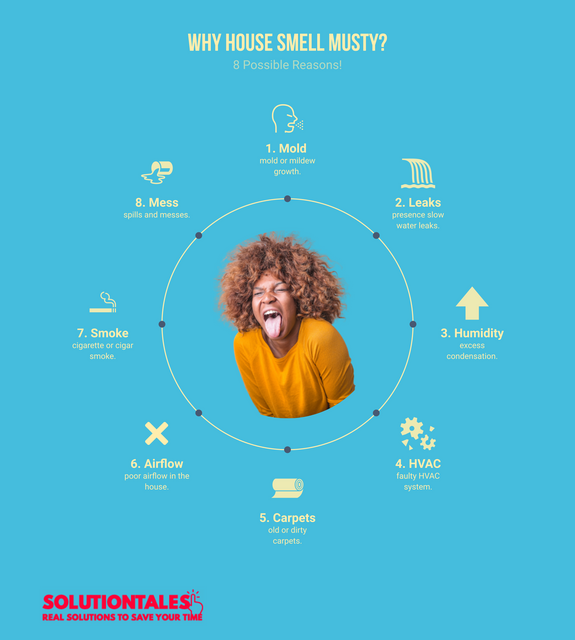 The most apparent cause of musty smells in homes is mold or mildew. Early formation of these fungi may emit a less pungent yet distinct stench. But the longer you leave them to spread in your house, the more pungent the musty odor will be.

There are many possible causes of their growth, but I suggest checking damp spaces first! These fungi love anything humid and moist. You can start in your bathrooms, attics, or basement. After all, the combination of stagnant air and excess humidity is perfect for them.

Once you suspect the cause behind the musty stench in your house is mold or mildew growth, remove them ASAP. Prolonging the issue won’t only make your home smell worse, but it can also lead to health issues.

Slow water leaks can come from cracked pipes, leaky seals, or water seeping into your roof, wall, or floors. Any moisture you let into your house’s fabric lingers, creating a haven for mold and mildew. And when you leave these fungi to thrive, expect your home to smell musty and nasty over time!

Aside from that, failure to dry your house following water damage can also leave a musty stench. Whether caused by a flood due to a recent storm or your kitchen sink overflowing, these can leave a smelly mark. And not to mention, they can create the perfect breeding ground for mold and mildew.

If you have excess humidity in your house and limited airflow, condensation can be an issue. It refers to a water vapor you’d often find on colder surfaces, like around your windows or walls. And when they lose heat, the water condenses into droplets, leading to condensation!

Aside from creating breeding grounds for mold, condensation also leaves a musty smell. You can experience condensation in your kitchen or bathroom during the colder months.

If you haven’t been checking on your HVAC system, expect your house to have high humidity levels. And mold and mildew come with moist and damp environments — and we all know what happens next. So, unless you’ve been changing your HVAC system’s air filters or cleaning its ducts, there’s no reason why you shouldn’t suspect it to be the cause behind the musty smell.

Aside from a neglected HVAC system, musty odors trapped in its gears can also lead to a foul stench. After all, any stuck grime, dirt, or mold spores can spread throughout the system and your home. Moreover, your heating and cooling equipment may also emit a musty smell.

Your carpet can emit a musty stench if you haven’t washed or vacuumed it for a while. And this is particularly more common in older carpets. Moreover, carpets consisting of natural materials absorb more moisture from their surroundings. As a result, these carpets can emit musty odors faster than those made with synthetic materials.

Either way, it’s crucial to deep clean your carpets to prevent them from producing foul odors. Surface cleaning won’t be sufficient and will only remove the first above at most. You won’t be able to get into the gunk and spores that drift down to your carpet’s base over time.

Poor airflow might be the culprit behind the musty smell if you haven’t opened your windows or been at your house for a while. Aside from that, it may also result from a faulty HVAC system. Either way, excess moist and stale air around your home can accumulate mold spores. And with that comes the distinct musty stench we all dread.

Even if you’ve only smoked one cigar or cigarette in your home, it can leave a lasting impression. After all, soft surfaces like your carpets or drywall soak in the smoke’s odor and nicotine. Over time, these can begin to produce a distinct, musty stench. The worst part about this is that once you’ve exposed your house to the smoke, the musty scent can linger for decades hence try and quit smoking.

All spills and messes can lead to a musty smell. If you don’t clean these up ASAP, they can seep into your carpets or the subfloor of your home. And over time, those messes can dry up and emit a musty stench that can linger for many years.

How to Remove and Deal with Musty Smells In Your House?

No homeowner wants to deal with musty odors around their house. So, once you know the reason behind the distinct stench in your home, act fast! Here are a few proven ways to remove musty smells in your house:

Once you confirm mold or mildew is growing in your home and they’re behind the musty smell, remove them ASAP! Whether the fungi are growing in your basement, bathroom, kitchen, or attic, you need to get rid of them. But remember only to work on smaller patches of mold or mildew as it can be dangerous. After all, these fungi are toxic and can cause several health issues.

So, contact a professional ASAP if you’re dealing with denser or larger mold or mildew patches.

But if you’re dealing with small patches of mold and mildew in your home, prep the following things. All these should keep you safe even when dealing with the fungi directly.

Cut off the affected areas if you’re dealing with growth in your walls or sheetrock. But only do this if you have experience, as you’ll also need to change those cuts with wall insulation.

But if you have mold and mildew growth on easy-to-reach hard surfaces, scrub them off with liquid detergent and water. Remember to never leave any area in your house damp and moist as it can lead to more fungi and musty smells! Either way, once you’re sure you’ve removed all mold and mildew, seal the areas with primer or paint.

If you’ve spotted mold or mildew growth on your ceiling tiles and carpet, it’s best to throw them away. After all, these are porous materials, making it nearly impossible to kill fungi completely.

An easy and efficient way to combat the musty smell is by letting fresh air in your house. After all, these nasty odors must go somewhere else. And to allow stale air to leave, you need to invite in new and fresher air! As mentioned earlier, musty smells can originate from dust or poor airflow. So, it only makes sense to combat the stench with fresh air.

Of course, you can also use your HVAC system to draw out the musty stench and capture the mold spores.

Slow water leaks are one of the main culprits behind musty smells in homes. So, it’s best to identify and repair the leakage ASAP. I recommend hiring a plumber to find where water is seeping into your house fast. After all, they use moisture meters or infrared cameras to find the source of the leaks. It saves you from second-guessing and helps you remove the musty stench before it worsens.

Since musty smells originate from humid and damp environments, it’s best to combat those conditions! And what better way to dehumidify your home than installing a dehumidifier? Aside from that, it keeps mold and mildew growth under control.

I recommend keeping your interior humidity at or less than 50%. You can see the moisture levels in your house by using a separate hygrometer or a humidity sensor. But only get those things if the dehumidifier doesn’t already have them built-in. And you don’t need to get a separate dehumidifier if your HVAC system has it as part of its unit.

Aside from those, here are foolproof ways to dehumidify your house:

Have Your HVAC System Checked

I’ve established how crucial HVAC systems are in controlling musty smells. After all, not only will a functional HVAC keep the nasty odors at bay, but it will also keep your house fungi-free!

If you have experience working with your HVAC systems, there’s no reason why you shouldn’t clean them yourself. But if you don’t, I recommend having a professional give your HVAC system a deep clean. And that includes replacing the air filters to ensure your air isn’t going through debris!

Besides having your HVAC systems cleaned, I also recommended having them inspected by a professional at least once every three months. It helps ensure your HVAC is working and doesn’t bring any musty odors into your home.

Replace Your HVAC if Necessary

If your home’s HVAC system has finished its run or doesn’t fit your home well, replace it fast. Prolonging this won’t only worsen the pungent odor in your house but it will also cultivate mold. So, stay up-to-date and have your HVAC replaced if necessary.

Q: Does the presence of a musty smell in my house mean I might be dealing with mold?

A: Although not always, the presence of a musty smell may mean you have mold in your home. Mold contains microbial volatile organic compounds, the cause of the distinct odor. They produce potent and unpleasant odors indicating mold or mildew growth. Still, there might be other causes of the musty smell, so inspect the source ASAP.

Q: How can I know where the musty smell in my house originates?

A: Since a musty smell indicates mold growth, check for water leaks. After all, the distinct odor is a unique trait the fungus possesses. So, it only makes sense to begin where mold and mildew grow most — damp and humid environments! This way, you’ll be able to discover where the musty smell is coming from in no time.

Q: What can I do to remove the musty smell in my house permanently?

A: The best way to ensure the must smell never comes back to your home is by using odor absorbers. You can get ready-made formulas at your local stores or use the things you already have! Generally, activated charcoal or baking soda works best in eradicating musty smells. But you’ll need to replace these absorbers once every 1 to 2 weeks.

Q: Can using a dehumidifier help with the musty smell in my house?

A: Even the tiniest dehumidifier can do big things for your home regarding musty smells. It controls the condensation or humidity levels in your living space. As a result, dehumidifiers prevent the formation of the distinct musty odor we all wish to avoid. Aside from that, dehumidifiers can also stop mold and mildew growth.

A: Prolonged exposure to the musty smell in an enclosed space can cause several health issues. Luckily, the symptoms are mild and range from a stuffy nose to itchy skin. Still, when unaddressed, these symptoms can turn into worse medical issues.

Now that you have a better idea of why house smell musty, making it smell fantastic again should be easier! Many factors can lead your home to smell musty and overall nasty. And these range from mold growth and dirty carpets to messes around the house.

Whether you got your home fresh from the market or had it for decades, these smells don’t discriminate. So, be proactive, and your house will stay must-free and smell better than ever!